In order to achieve a platform that can support various workflows and be extensible for the foreseeable future we went through extensive planning of possible use cases and decided to significantly change and improve the architecture.

Below, we aim to demystify that complexity by providing insight into how OHIF Platform is architected, and the role each of it's dependent libraries plays.

The OHIF Medical Image Viewing Platform is maintained as a monorepo. This means that this repository, instead of containing a single project, contains many projects. If you explore our project structure, you'll see the following:

OHIF v3 is comprised of the following components, described in detail in further sections:

The extensions directory contains many packages that provides essential functionalities such as rendering, study/series browsers, measurement tracking that modes can consume to enable a certain workflow. Extensions have had their behavior changed in OHIF-v3 and their api is expanded. In summary:

In OHIF-v3, extensions no longer automatically hook themselves to the app. Now, registering an extension makes its component available to modes that wish to use them. Basically, extensions in OHIF-v3 are building blocks for building applications.

OHIF team maintains several high value and commonly used functionalities in its own extensions. For a list of extensions maintained by OHIF, check out this helpful table. As an example default extension provides a default viewer layout, a study/series browser and a datasource that maps to a DICOMWeb compliant backend.

The modes directory contains workflows that can be registered with OHIF within certain routes. The mode will get used once the user opens the viewer on the registered route.

Some common workflows may include:

In the mentioned modes above, they will share the same core rendering module that the default extension provides. However, segmentation mode will require segmentation tools which is not needed for the other two. As you can see, modes are a layer on top of extensions, that you can configure in order to achieve certain workflows.

This library is the core library which consumes modes and extensions and builds an application. Extensions can be passed in as app configuration and will be consumed and initialized at the appropriate time by the application. Upon initialization the viewer will consume extensions and modes and build up the route desired, these can then be accessed via the study list, or directly via url parameters.

Upon release modes will also be plugged into the app via configuration, but this is still an area which is under development/discussion, and they are currently pulled from the window in beta.

Future ideas for this framework involve only adding modes and fetching the required extension versions at either runtime or build time, but this decision is still up for discussion.

OHIF core is a carefully maintained and tested set of web-based medical imaging functions and classes. This library includes managers and services used from within the viewer app.

OHIF core is largely similar to the @ohif/core library in v2, however a lot of logic has been moved to extensions: however all logic about DICOMWeb and other data fetching mechanisms have been pulled out, as these now live in extensions, described later.

Firstly, a large time-consumer/barrier for entry we discovered was building new UI in a timely manner that fit OHIF’s theme. For this reason we have built a new UI component library which contains all the components one needs to build their own viewer.

Check out our component library!

Overview of the architecture#

OHIF-v3 architecture can be seen in the following figure. We will explore each piece in more detail. 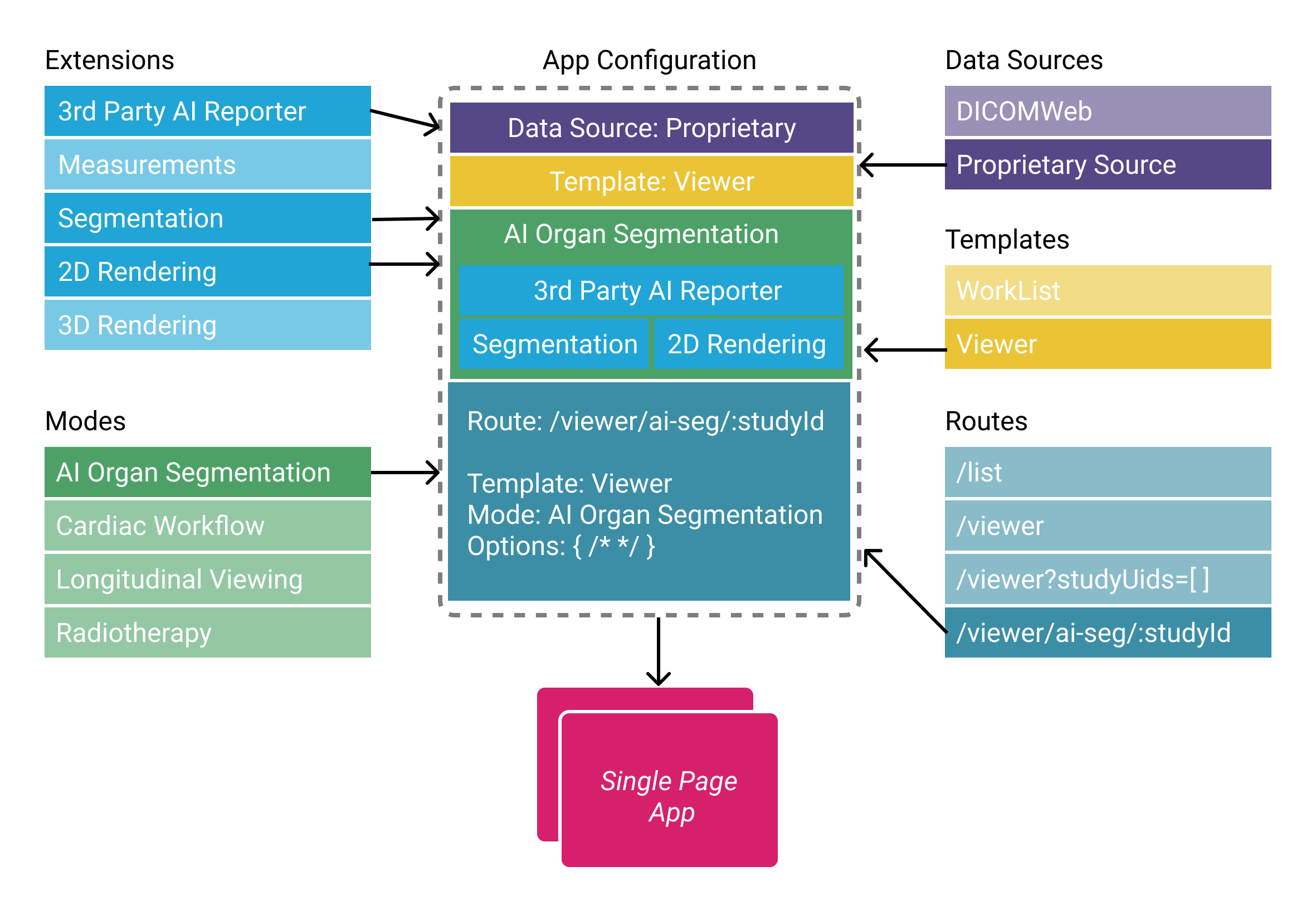 Can I create my own Viewer using Vue.js or Angular.js?

You can, but you will not be able to leverage as much of the existing code and components. @ohif/core could still be used for business logic, and to provide a model for extensions. @ohif/ui would then become a guide for the components you would need to recreate.

When I want to implement a functionality, should it be in the mode or in an extension?

This is a great question. Modes are designed to consume extensions, so you should implement your functionality in one of the modules of your new extension, and let the mode to consume it. This way, in future, if you needed another mode that utilizes the same functionality, you can easily hook the extension to the new mode as well.